I went for this talk to learn more about hydrogen water and its benefits since I am consuming hydrogen water everyday. I have to say the English translator really sucks. Hopefully I don't interpret wrongly (don't shoot me) because some of the translation has sentences hanging. The speaker is actually the son of Prof. Shigeo Ohta who pioneer the study of molecular hydrogen and its effectiveness in medicine. He spoke in Japanese.

The first medical aspect of Hydrogen report was published in 2007 in the Nature Medicine magazine ( apparently a prestigious magazine) which only select about 30 reports in a year. From the year of 2007-2014, a total of 400 of this research reports has since been published with different contents.

Hydrogen Water verses  Conventional Medicine.
Hydrogen  water works in most organs with no side effects whereas conventional medicine works only for a specific organ or sickness. For example , if  you have stomach pain, your stomach medicine only helps your stomach problem. It doesn't heals your headache. With hydrogen water, it heals both the stomach and headache at the same time.

When we smoke, drink , stressed up, inhale toxic emission, our body produce active oxygen. People looks older than their age due to a lot of stress. There are different kinds of active oxygen. Not all are bad, some are needed and those are the good active oxygen.

After the age of 40, our mitochondrial starts to deteriorate. Hydrogen can stop this deterioration.  Hydrogen will not only protect the body from active O2, it also has anti-inflammatory and anti-allergic effect. Latest research shows that Hydrogen produce hormones to protect our nerve system.

Mr Fumiaki showed some examples of how hydrogen water aids healing of wounds due to teeth extraction faster and better compared to normal water.

Efficient way to consume Izumio.
Since hydrogen is the smallest molecule in the universe, it can go through most substance like the human body and plastic bottle. So we need to drink quickly.  Although not encouraged, one can still pour the Izumio into a glass of water. Apparently hydrogen will still stay in the water for approximately 3 hours. But most of us 'Kiasu' will try to finish the water in one sitting from the Izumio pack.

Do not boil the hydrogen water , warming is ok.  Best time to drink is when tired or stress. Drink before or after drinking alcohol to feel better.

How much should I drink?
Drink more if sick. This is when the mitochondrial deteriorate and a lot of active O2 is produced. On normal days drink about 300cc - 500cc. Drink more ( big gulps) at one time so that the hydrogen can go thru all over the body. In other words, don't sip a little at a time.

How to store?
Terbalik. The pack must be stored with the cap down to reduce hydrogen from escaping over time.

There was a survey done in Japan to find out the which aspect of effectiveness is Izumio to male and female. Results showed that most males find that Izumio is most effective for hangover and fatigue. While the females find it best for constipation.

Mr Fumiaki also showed a diagram of all the diseases that has already had clinical trials done on human and also ongoing trials...but too bad, I don't have the diagram.

Before closing, Mr Fumiaki conveyed a message from his dad to us.

So continue to drink hydrogen water, then you can work hard and produce results !!!!"

When I had my first child, I'll jump to the rescue at the very sound of my baby crying.
Ever ready to soothe, comfort and stopped the crying. So kancheong. First time mom mah.

When the second one came two years later,  I was not so freaky about baby crying anymore ...at home I mean not outside. If I am outside have to be mindful of the people around...can't let baby bawls and distract everyone.

Once we went to Cameron for a holiday, and my younger child slipped and fell at the bee farm. At that time, daddy took our pictures with the crying face and for the first time I felt baby crying face is quite cute afterall.

Nowadays if I see a baby crying, I'll 'enjoy' the facial expressions first. So evil right?
Actually, you know your child would be alright and it is okay for them to cry....no need to go and rescue lah immediately especially when one is not in danger.

When I saw this mom posting on her crying child, I can't help finding it so cute actually.
Sorry ya!

So tempted to post some baby crying face...but dare not lest kena saman!

Wait a minute....while searching for some cute baby crying face I stumbled on a very interesting article that I could really relate to..some of them at least .....eerr minus the not-so-polite words!
http://youngfashioned.com/2015/07/21/10-types-of-people-that-should-be-punched-in-the-face/
Posted by Magictree at 6:43 PM 2 comments:

Email ThisBlogThis!Share to TwitterShare to FacebookShare to Pinterest
Labels: misc

I hate cooking. Period.
I have a super duper picky kid. He kills my interest in cooking.

ok...not entirely true. Let's just say I am pretty inefficient in the kitchen. I spend the whole day coming up with only a few dishes. And after  I cook, I feel so tired I don't enjoy my food at all.

And I have to crack my head to think of breakfast, lunch, pack lunch for school, tea time and dinner! Aarrgh....that's why weekends my kitchen is closed for business...most of the time.

Still remember when I first started staying at home, I was so gungho in my cooking. Followed all the recipe book, bought all the ingredients. Soon....everything becames expired. Vegetables withered, onions sprouted, potato turn bitter.....

So now I only buy at most 3 days worth of vegetables.
And today is no different, I don't know what to cook except this 'chap pa lang' dish. 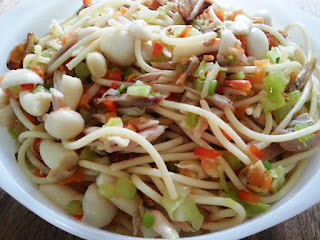 Dig into the fridge, find all the leftovers, dump into spaghetti and fry!

Really admire those who can cook a storm. I have friends like that. They actually like cooking and inviting guest over. I'll be worried sick if I have to do the hosting...ended up buying most of the dishes!!!!

Today's is the last day of school before the term break. I am already on holiday mood.
So lazy...to do house chores, so lazy to cook , just want to relaxxxxxx.............

When kids were small we used to go somewhere locally every holiday. When they were in Kindergarten , we used to ponteng during schooldays whenever hubby has a trip. Once started primary school, minimized the pontenging as you know chinese school has no mercy on homework.

Now in secondary school  even harder to ponteng because there is this thing called PBS and if you miss it, you won't get to do the worksheets.

But this holiday we would not be going anywhere overnight. The boys have exams shortly after the break. This is what I hate the most. Why do they have to have exams after break? Why can't have exams first then break!!!!

I really enjoyed the time when they were in pre-school. No stress, can pack and go anytime....ah...the time is too short. Those of you who have kids in preschool, these are your best years. Start formal schooling.....all the stress will visit you!

Haze Has Come For A Visit Again


A yearly affair....not a nice one though. These few days the haze is really bad.

I noticed that my older son who used to scramble for a mask at the slightest presence of haze is not doing it this year. I have to forced him to bring the mask to school but still he doesn't wear it.

I can only conclude that the elder boy's immune system is stronger now. Must be the work of Izumio and Super Lutein. I am beginning to like this product more and more.

I also noticed he hasn't come down with his quarterly flu and cough during exams recently. He has been consuming the above 2 products for 3.5 months now.  Keeping fingers crossed.

We used to buy half a dozen bottles of 'African Sea Coconut' cough mixture every year. For a long time now, it has been left untouched.

If you want to know more about Izumio hidrogen water and Super Lutein or how to place an order, feel free  to contact me via

Got my boys to help me hang up the clothes as I was rushing to do something else. 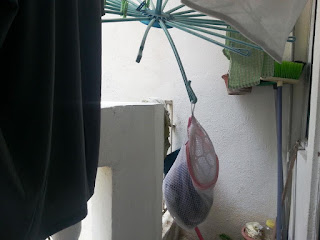 Just hang up the whole bag of netting consisting of underpants. How convenient!!!!!

Actually, this is not the first time they help me hang clothes...lazy bums!
This unexpectedly came from my elder child who is much more reliable. Hmm....hopefully not influence by his lazy younger brother. Somehow it is easier for the bad to influence  the good.

I joined a group of 16 others on Saturday ( 29/8) for the Bersih 4 event. My group comprised of all adults and some senior citizens. Hats off to them. Senior citizens put away their worries on "frequent toilet stops", " knee/leg pain" and came for the event.

We left from the BJ LRT station as early as 11 am.  There were already many people there. When the train came, we were all packed like sardines but it was fun. We talked to other strangers who are also first timers.

We alight at Hang Tuah station and walk a few km down to the Methodist Church. Since we were early, we dropped by a cafe. Everywhere we turn, there are "yellow people". As time passed, more and moe yellow people appeared. Met some church friends.

As the prayer group did not materialised , we walk further to Menara Maybank. Yellow people were everywhere. Every food stalls were filled. Mc Donalds near Kota Raya have to closed by 2pm+ due to shortage of stocks!!!. We were given free mineral water both outside and also the beef noodle stall. ....Apparently their boss sponsored.

It was a carnival like atmosphere. As time passed by, many groups marched past with funny placards and chanting "Bersih". More and more yellow people filled the road till there were no more 'parking' space. It was truly a sight to behold. I cannot described the feeling of togetherness. People were so friendly. We looked out for each other. We display utmost patience as everyone trying to take pictures everywhere. 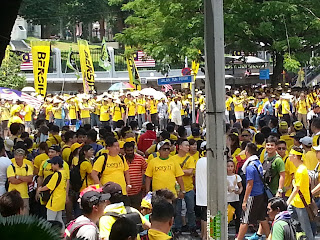 We moved to Dataran Merdeka but by now the road was so full that we could hardly get near. We hanged around for a little while longer before making the move to board the train home.

It was an experience of a lifetime. Would I go for future Bersih? Definitely if the things we were fighting for is for our country. I deeply regretted that I couldn't make it to the second night but I thank God for the peaceful assembly. It was truly encouranging to see people from all walks of life , with one mission took to the streets on a hot day. Much more encouraging are the faces of young people, the future generation of this country standing up and be counted.

Many think this is a waste of time. Life goes back to normal. But I begged to differ. This is the process we need to go through before the real breakthrough. I really thank the participants of previous rallies for setting the precendence, for without them, there will not be Bersih 4 and without Bersih 4, our success of reaching our goal will be much more harder and further.


God Bless Malaysia!
Posted by Magictree at 8:10 PM No comments: